So it’s been a couple of months since I replaced the keyboard on my Gazelle and I’m still digging it. There’s one other issue that I should mention that I hadn’t really worried about. I noticed the Bluetooth never worked. Since I already had a USB mouse it wasn’t a big deal until I started having other issues. Periodically I’d looked it up but never found any solid solutions. The Gazelle has a dual-purpose Intel 8260 WiFi/Bluetooth adapter and it seemed like there were issues with both the 7260 and 8260 under Linux. It also appeared that the issues were resolved in newer kernels but even upgrading to 4.6 didn’t resolve the issue. Nothing I did could even get the adapter to show up.

Let’s roll back to the beginning. All of the System76 computers ship with Ubuntu. At the time I ordered mine I selected 16.04 LTS. Of course, I’m a Fedora fan so when I upgraded the drive to the EVO I swapped the OS. I was thinking maybe there was a driver that wasn’t loading under Fedora but I struck out at every turn. I have a clone of the factory drive as an external USB drive so I booted off of that and proved that it wasn’t working under the stock Ubuntu install either.

Fast forward to the September/October timeframe and we get into the latest problem. This one was enough to make me want to throw the Gazelle of a bridge from a fast-moving vehicle. My WiFi was intermittent at best and I couldn’t for the life of me figure out why. I knew that Ubuntu 16.04 had serious WiFi issues so I talked to Noah at LAS and he shared with me the script he used on his machines. After tweaking it for Fedora it still didn’t help.

This was an increasingly painful problem. If I was able to get on WiFi it wouldn’t last for long. I did system updates thinking it’d fix it but it was all short-term. I nearly blew a gasket when I was at a conference and needed to dial in to work but couldn’t even get a connection. Had I not been surrounded by a bunch of co-workers and clients it would’ve been an ugly seen. Fortunately I’d brought my work machine and had to resort to Windows.

I went home and contacted System76. Just like they did with the keyboard back in June they immediately offered to cross-ship a new adapter. They also suggested checking the connections. Here’s where I began kicking myself. I’d opened the case before to do upgrades and repairs. Why hadn’t I thought of doing the same with this problem? Had it been a desktop I would’ve already torn it apart. Regardless, I stopped asking why and opened it up. Lo and behold I found two problems. 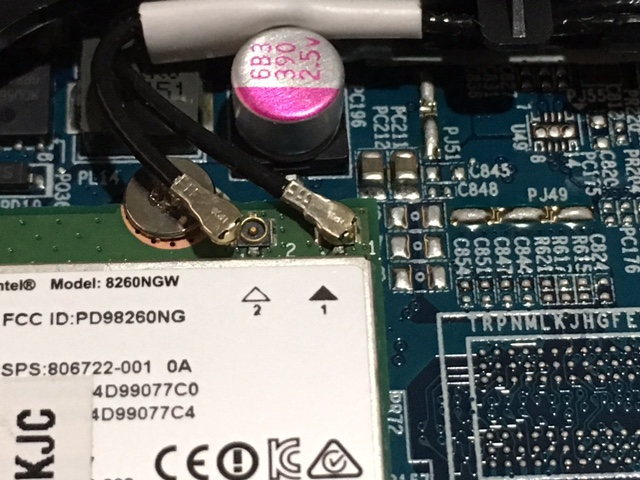 I thought I got a better shot of the overall problem but as you can see, problem #1 is that antenna 2 is completely disconnected! What you can’t see in this image is that the adapter was barely seated in the slot. The screw holding it in place wasn’t completely in place. One of the upgrades I made when I ordered the Gazelle is to add AC capability since I’d installed an AC router. The only thing I can figure is that when they swapped out the adapter they didn’t do a very good job. There was also a strip of tape that was intended to hold the antennas in place but it wasn’t where it should’ve been.

I couldn’t get the antenna re-connected without removing the adapter so I could put opposing pressure on it from the back side. One it was solidly in place I secured both antenna connections with the provided tap. Next I re-inserted the adapter until I got a solid “click”. What happened next was beautiful.

Not only did all of my expected SSIDs appear but so did a number I’d never seen on this laptop. And Bluetooth worked for the very first time! I’d actually picked up two different Bluetooth mice and they paired immediately. Everything is working exactly as it should now. Life is good once again!